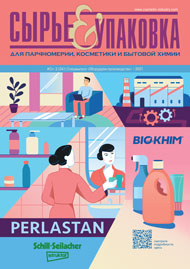 END_OF_DOCUMENT_TOKEN_TO_BE_REPLACED

The skin is a common and popular route of administration for both cosmetic (eg skin lighteners and tanners) and pharmaceutical (eg steroid) active ingredients; however it is also a very challenging route. The structural complexity of the skin means that this route is only really suitable for active ingredients with quite a narrow profile in terms of molecular weight and lipophilicity. Even then, it can be difficult to achieve good bioavailability – a sufficient quantity of active, delivered to the right location in the skin within a suitable time frame so as to be efficacious.

The formulating strategy to help ‘push’ the active ingredient out of the formulation has been discussed; however that is only tackling one part of a complex problem. It is generally acknowledged that active ingredients with a log P (partition coefficient) of between 1-3 are most suited to topical delivery, and once these have been ‘pushed’ from the formulation, they should penetrate the skin relatively easily. However, actives outside this range that are hydrophilic (log P<1) or very lipophilic (log P>3) do not find it as easy to penetrate the skin due to the alternating aqueous/non-aqueous regions of the intercellular lipids and hydrophilic domains. For these actives it can be useful to adopt a ‘pull’ strategy, where an excipient in which the active ingredient is soluble acts as a carrier vehicle, pulling the active into the skin. To do this, the excipient must both solubilise the active and show good solubility in the skin as well, acting as a penetration enhancer. Dimethyl isosorbide (DMI) is an example of an excipient that excels in this role.

In our next example two formulations were prepared with a model hydrophilic active, propagermanium. The formulations were simple creams, with one formulation including 10% dimethyl isosorbide and the control formulation replacing DMI with water. Permeation studies through porcine skin were conducted and the amount of active in the different compartments of the skin was measured after 20 hours. Figure 2 shows that the formulation containing 10% dimethyl isosorbide resulted in more active ingredient being located in the skin (after tape strips were removed) than the control formulation. Interestingly, the active was confined to the skin and tape strips and had not entered the receptor fluid. This suggests that DMI might be suitable for delivering actives into the skin without the actives entering systemic circulation. 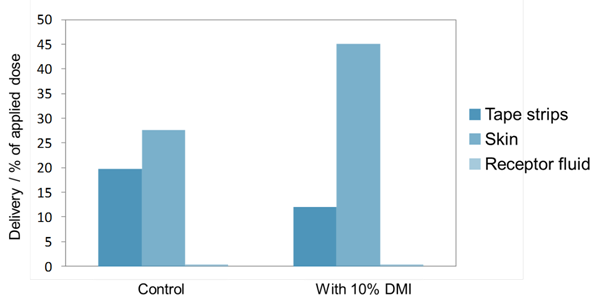 Figure 2: Permeation studies of Propagermanium through porcine skin, from two formulations with and without 10% dimethyl isosorbide (DMI)

Targeted delivery – hitting the right layer in the skin

We have looked briefly at controlling the rate of delivery and at delivering ‘challenging’ actives into the skin. But there is also something we can do as formulators to help control the location of the active ingredient in the skin. We can use liquid crystal-forming emulsifiers, ie surfactants that form liquid crystalline phases not just on evaporation of the aqueous phase, but in the formulation itself. There are two types of liquid crystalline structure that we have formed, the so-called oleosome and hydrosome structures. Oleosomes are liquid crystal regions that form around the oil drops in an emulsion, shown in Figure 3a, and appear under optical microscopy as ‘Maltese crosses’. These regions are thought to be made up of multiple surfactant bilayers that encapsulate the oil drops, providing stability to coalescence as well as targeted delivery for some active ingredients. Hydrosomes are liquid crystal regions that form throughout the aqueous regions of an emulsion. They can also be visualised under optical microscopy (Figure 3b), and can also be identified through rheology measurements as they give the formulation a unique rheological profile due to the lamellar phases that form in the continuous phase of the emulsion. Formulations containing hydrosome liquid crystals also have an aesthetically pleasing light feel, as the lamellar layers slide over each other under shear.

For a hydrophilic active ingredient, propagermanium, an entirely different delivery profile is observed. Figure 5 presents the data from a study comparing the recovery of propagermanium from the different strata in porcine skin, following application with an oleosome- and a hydrosome-containing formulation. As the data shows, the amount of active present in the skin from the oleosome formulation is much lower than from the hydrosome formulation, while the receptor fluid from each study shows almost no active has permeated that far. 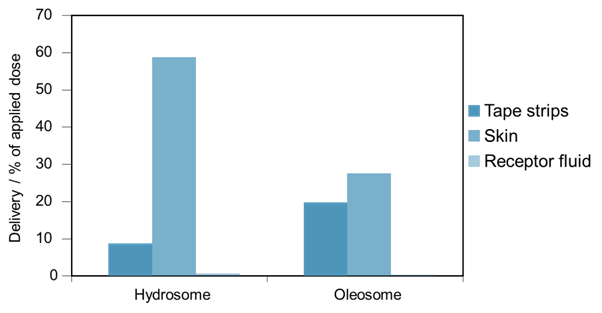