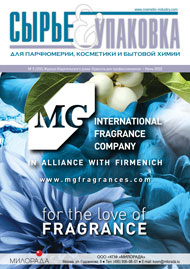 END_OF_DOCUMENT_TOKEN_TO_BE_REPLACED

While Russia retains its rank among the top ten markets for luxury goods, a sudden decline in consumption introduces a new wrinkle in the country’s complicated history with luxury brands. High inflation, flat GDP growth, currency devaluation, and political uncertainty triggered by the crisis in Ukraine are impacting forward projections.[1] The most recent assessment suggests the Russian luxury market contracted seven percent in 2014 (versus middling two percent growth in Western Europe).[2]

Russia has always proven unique among its BRIC peers. The market remains highly fragmented (both economically and geographically), due to the dense concentration of wealth among high net-worth individuals (HNWI). Last year, 110

Russian billionaires collectively accounted for 35 percent of all household wealth in the country—establishing the highest level of wealth inequality registered in any mature market.[3] Without a comparable middle class defined by expanding discretionary spending power, Russia remains the only BRIC country where the ratio of luxury spending to consumer expenditure is expected to shrink by 2018.[4]

In the short term, catering to this compact, static set of HNWIs has been further complicated by visa bans and other financial restrictions accompanying EU sanctions. Compared to Q1 2013, tax-free shopping by Russian tourists traveling abroad is down nearly nine percent this year—with Germany, Finland, and Italy all seeing double-digit declines.[5]  Luxury brands must compensate by either shipping internationally or serving high-value clients locally. 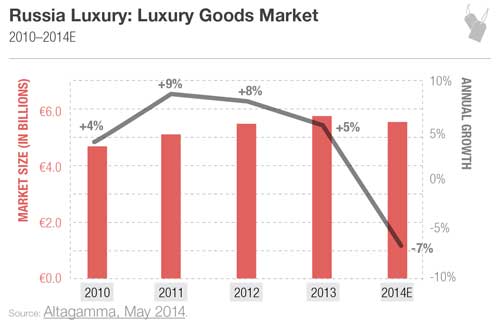 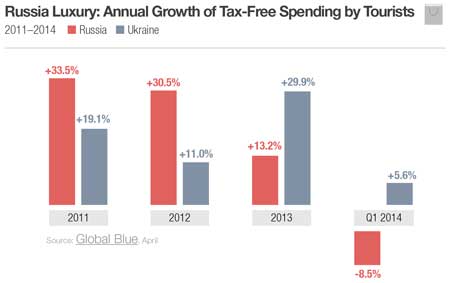 Instead of further saturating Moscow and St. Petersburg with costly additional storefronts, luxury brands have an opportunity to move online to cater to the domestic Russian luxury consumer and drive demand for purchases that are often made abroad. In a market that over-indexes on digital and social penetration, few Western brands are making the requisite digital investments and insulating themselves from continuing market uncertainty. The dominance of local platforms such as search engine Yandex and social giant Vkontakte demands a uniquely Russian approach. [6,7,8,9,10]

Our thesis is that the success of luxury brands in Russia is inextricably linked to digital competence. This study attempts to quantify the digital performance of 73 global brands and five local market leaders. Our aim is to provide a robust tool to diagnose digital strengths and weaknesses, and thereby help managers achieve greater return on incremental investment. Like the medium we are assessing, our methodology is dynamic. Please reach out with comments that improve our approach and findings. 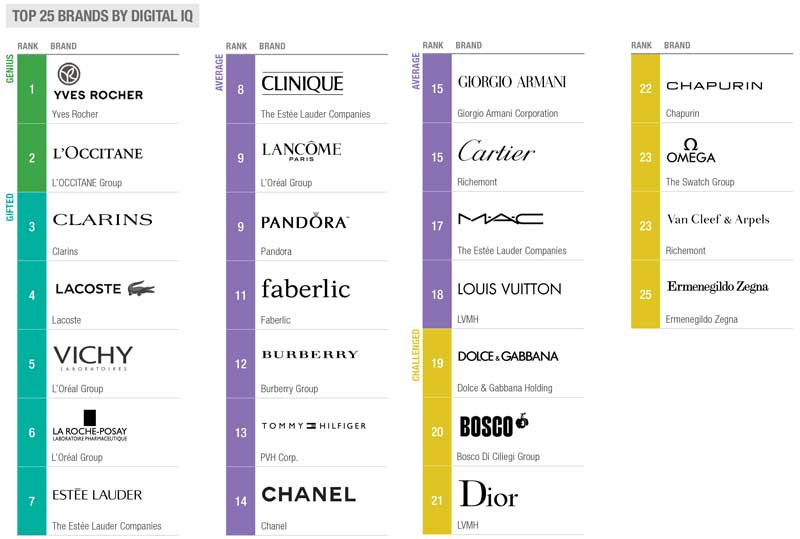 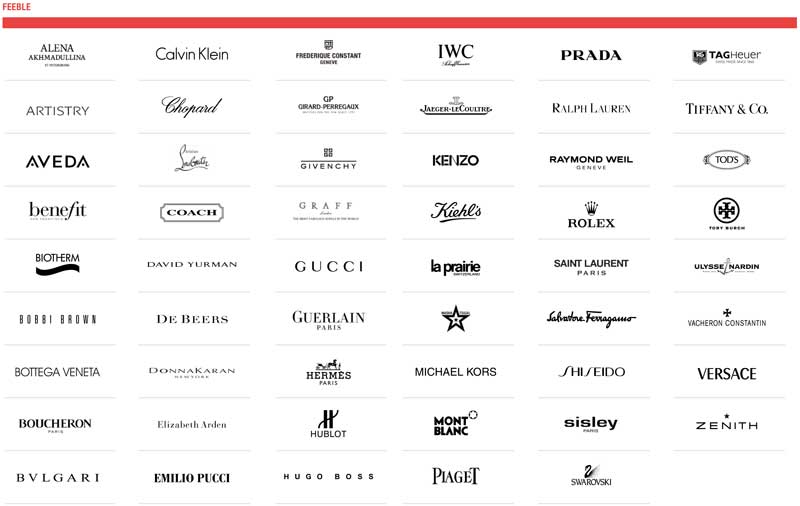 In 2013, cross-border Russian e-commerce exceeded $3 billion[11], accounting for nearly 15 percent of all online sales.[12]  Apparel is among the product categories in highest demand. The main reasons driving Russians to purchase clothing abroad include a more extensive brand offering, a favorable price differential, and the availability of desirable items absent on the domestic market.[13]

Currently, out of seven global Fashion brands maintaining e-commerce operations in Russia, only Lacoste ships products from warehouses located inside the country. In contrast, all Beauty brands send orders from fulfillment centers within Russia.

Over the past year, the Russian government instituted several harsh measures for online retailers, including the new personal data storage law. This will oblige companies operating in Russia to ensure the personal data of Russian users is stored within the country (beginning September 2016).[14]  Currently, 70 percent of Russian brand sites are hosted in Europe. Nearly a quarter (24 percent) are hosted from the United States. Lacoste is the only global brand with its local Russian site hosted in a manner compliant with the new requirements. 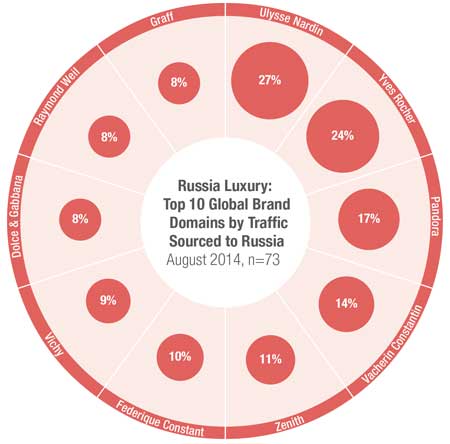 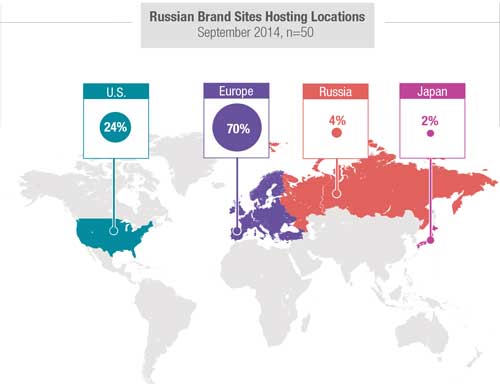 Thirty-five percent of Russian Internet users report that they discover new brands or learn about product launches through email newsletters.[15] The majority (72 percent) of brands surveyed provide consumers with the option to subscribe to a newsletter (either directly or via account creation), but only half (52 percent) sent any marketing correspondence within two months of initial sign-up.

L’OCCITANE en Provence, Clarins, and Armani effectively drive consumers from the inbox to the shopping cart by featuring time- sensitive offers as well as “buy” buttons linking to specific product pages. Others, such as Pandora, employ email to complement retail operations by featuring discounts and promotions redeemable in store.

Among brands participating in email marketing, 31 percent still fail to localize content. Many of these brands demonstrate an awareness of their subscriber base, but an inability to escape a “one size fits all” approach. For example, Kenzo asks users for their country or origin during initial email sign-up on the brand’s global site. Despite maintaining nine retail locations in Russia, subsequent correspondence promotes discounts at Paris locations—and makes no attempt to translate content. 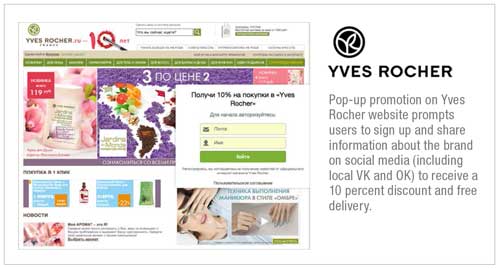 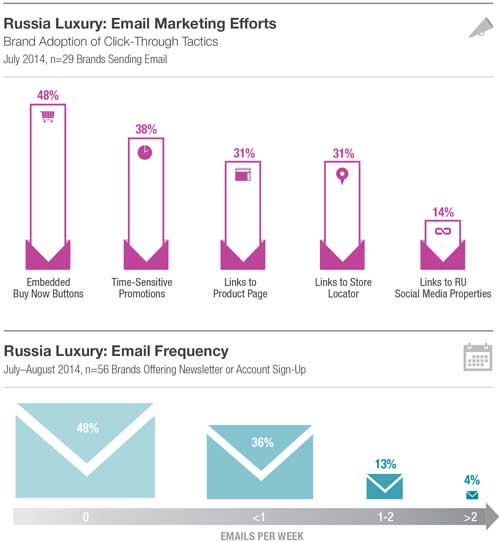 Among 16 brands maintaining dual presence across Facebook and VK, 12 duplicate their content and post frequency. On average, VK community size is larger than Facebook’s by 2.3 times. However, this number is skewed by three brands (Faberlic, Vichy, and Yves Rocher) that have attracted over 100,000 followers. In fact, seven out of 12 brands have larger audiences on Facebook, than VK. When comparing identical posts on two platforms, brands enjoy higher traction on Facebook, getting 1.2 times more interactions per post than on VK and twice the relative engagement to their community size. Yves Rocher is the only non-Russian brand to demonstrate the reverse trend. It gained 35 percent more interactions on the observed posts published on VK vs. Facebook. 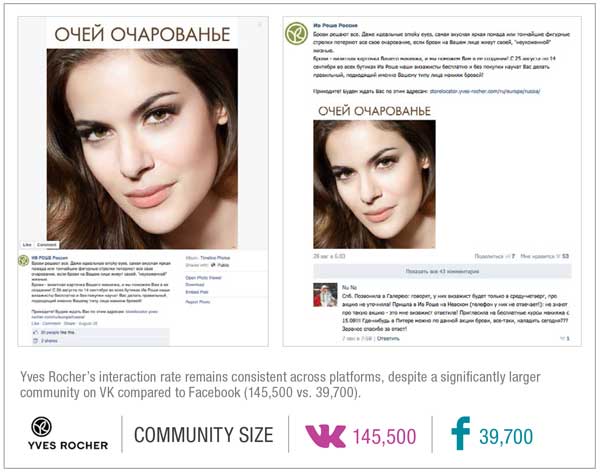 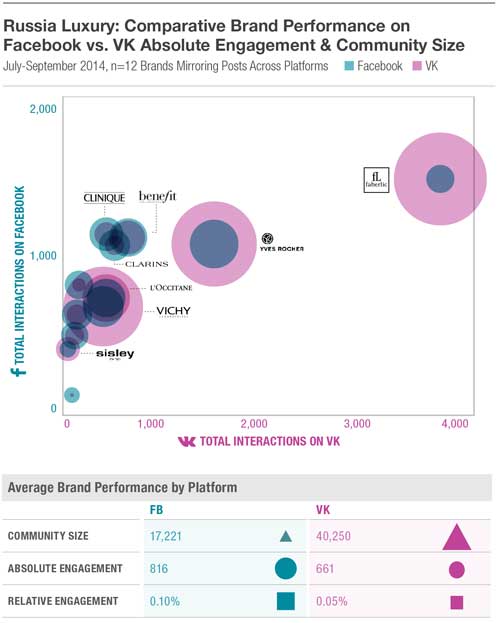 In 2013, 46 million Russians had smartphones, underperforming benchmarks set in the EU.[16]

Overall smartphone  usage in Russia is forecast to grow at an average rate of 16 percent for the next three years.[17] However, according to Russian’s largest mobile phone retailer, smartphone sales in Moscow in Q1 2014 dropped by eight percent compared to the same period in 2013, due to a challenging macroeconomic environment and decrease in confidence about the future among consumers.[18] At the same time, fast 4G+ connections remain sparse, with only 2 million users in 2013.[19]

Despite mixed signals on the rise of the mobile web in Russia, brands are not idling. Fifty-eight percent of local brand sites are already mobile optimized (up 22 percent compared to last year). 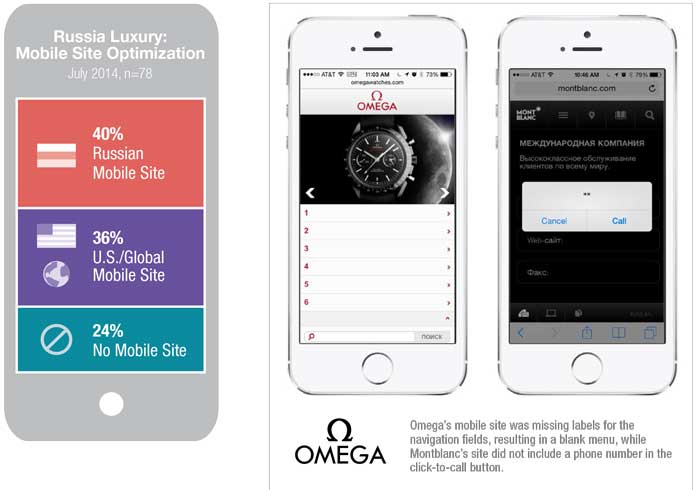